The Southern Caribbean is a difficult-to-define region, partly overlapping with the Eastern Caribbean, and containing a number of Dutch, British and French islands. Many of the islands in the Southern Caribbean are smaller and less extensively developed for tourism, the upside of which being you get a better look at nature and a more authentic cultural experience.

Islands like Curacao and Aruba, for instance, are known for having a slower pace of life than on many of the other Caribbean islands. Curacao, especially, and Bonaire are known for having amongst the best snorkelling and SCUBA in the Caribbean and the world. Meanwhile, on the opposite end of the spectrum, St Barts is well-known for being one of the most luxurious and exclusive destinations in the islands.

Amongst the larger islands that fall into this region are Barbados and Trinidad & Tobago. Barbados is popular amongst British cruise operators and is often nicknamed the “little Britain” of the Caribbean. Pretend you’re in a sunnier version of the British isles by visiting Barbados’ smaller version of Nelson’s column or attending a cricket match at the Kensington Oval.

Trinidad and Tobago, two of the least developed Caribbean islands even though the biggest part of their economy is fuelled by oil and natural gas. Nevertheless, the country is the original birthplace of many things we associated with the Caribbean such as steel drums, Calypso music and limbo. In particular, these two islands are known for having one of the biggest and best carnivals in the Caribbean just before Lent. 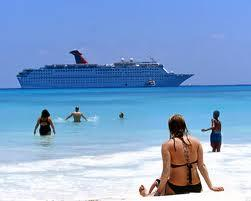 The most common port of departure is San Juan in Puerto Rico although in the past decade its popularity has slowly declined as a port for Southern Caribbean cruises. Since then, longer cruises have become more popular with departures from Miami or Ft. Lauderdale more common and even a number of options from New York. If you are travelling from the UK or the Netherlands there are a few options for you to avoid flying altogether by travelling from your home country .

Here we’ll be showcasing the latest special offers and cruise deals in 2018/2019, which deals are going fast and which cruise holidays to avoid at all costs. For the most up to date offers, it’s best to subscribe to our cruise deals newsletter ASAP!

Subscribe for latest Cruise Deals & Special Offers:
Twitter Facebook Linkedin Google-plus
Cruise Reviews
Go here to see our latest cruise reviews and guides now! Here we’ll be reviewing specific cruise ships and rating them, as well as rating the pick of the best cruises to look out for in 2018/2019 and beyond.
Cruise Guides

If you’re new to cruises or just want to make sure you’re making the right cruise holiday decision, have a read through some of our cruise guides to make sure you’re getting the most from planning your cruise and using all the tricks in the book to save money.
If there are any guides you would like to see please do get in touch and we’ll add it to our weekly blog.

Here we’ll be bringing you the latest cruise news that’s hot of the press, this will include any late breaking cruise related developments, what to expect from cruise holidays in the coming years; as well as any cruise news that would directly effect consumers.